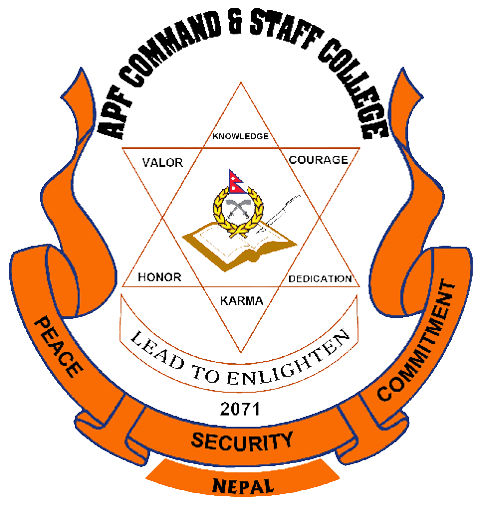 APF Command and Staff College has a motto of:
"Lead to Enlighten"

APF Command and Staff College is established to enhance the professionalism of mid-level officers of Armed Police Force, Nepal. The college is affiliated with Tribhuvan University, Nepal and imparting the conceptual, theoretical and empirical knowledge blending it with the practical aspects, so that, officers will be able to cope with the emerging non-traditional security paradigms. Apart from its designed syllabus, College is also conducting seminars, conferences and workshops as part and partial in cooperation and collaboration with Tribhuvan University, other academic institutions and related stakeholders.

This college trains its selected officers in the administrative, operational, staff and policy aspects of the organization. Besides, participating officers get an opportunity to have Masters in Security, Development and Peace Studies hand in hand with professional studies of Command and Staff Course.

The college is headed by a Deputy Inspector General of APF, Nepal assigned as the Chairperson of the Management Committee and the Commandant. The College has two main wings namely Academic Wing and the Professional Wing. Academic Wing is coordinated by Academic Program Coordinator responsible for the overall academic program of MSDPS. Eminent professors, professional experts and academicians run their program with independent deliberations. Professional Wing is headed by Chief Instructor and is composed of internal instructors (Directing Staff) who are all Command and Staff Course qualified from Nepal or abroad. This part is conducted in a syndicate and is facilitated by Directing Staff.

To give exposure to the student officers, college organizes excursion visit in neighboring countries' security organizations (similar in job nature) which is being beneficial in exchanging empirical understanding and experiences among the officers working in the field of law and order. College also organizes internal study tour to expose the student officers with working environment of the units in different work place.